The Unforgettable Summer of '45 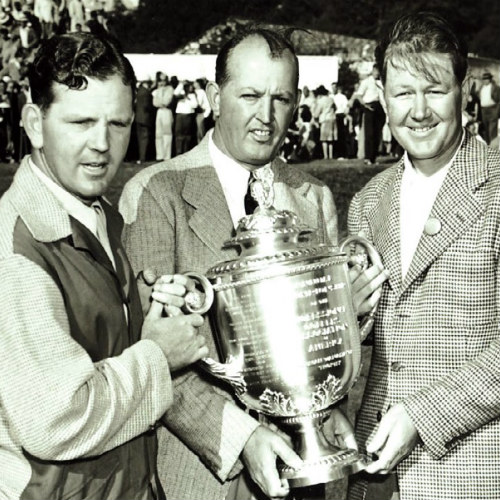 During the second week of August 1945, an unbeatable streak ended, which would become an unbreakable record. Byron Nelson’s legendary string of 11 straight tournament victories on the professional tour through the spring and summer ended in Memphis when amateur Freddie Haas Jr. won the Memphis Invitational. Nelson tied for third, six shots back.

The next week, the tour came to Knoxville and Holston Hills Country Club for the Jaycee Supreme Open.The event was sponsored by the Knoxville Junior Chamber of Commerce and Supreme Foods. The purse was a whopping $13,333, with $2,000 going to the winner.

Nelson was entered at Holston Hills, even as he said he was “overgolfed” after the Memphis tournament. Sam Snead, who had spent 26 months in the U.S. Navy, was in the field, as was Lt. Ben Hogan, who was serving a two-year hitch in the Army Air Corps as the country was deeply embroiled in World War II.

The 33-year-old Nelson had hemophilia, a blood disorder that caused his blood to clot four times slower than normal. The condition kept him out of military service but he was no less a patriot. The week after the Jaycee Supreme Open, Nelson joined Snead, Harold (Jug) McSpaden and Craig Wood for a fundraiser at Oakmont Country Club in Pittsburgh, Pa., for the hospitalization and rehabilitation of injured servicemen. That was one of many events that Nelson played to raise money for the war effort.

Also in the Knoxville field was Jimmy Thomson, who grew up at Holston Hills when his father, Wilbur Thomson, was the pro. The younger Thomson, one of the longest hitters on tour, held the Holston Hills course record of 63.

Fred Corcoran, the tournament manager of the PGA who ran the tour events, wanted the pros to play Holston Hills from the front tees, 6,301 yards at the time. But Charley King, a member of the Holston Hills golf committee, insisted the players compete from the back tees at a hefty 6,993 yards, a brute of a course for 1945. Corcoran floated a compromise of two days from the back tees and two days from the front tees but Kingwas having none of it.

“I told (Corcoran) that the fans wanted to see the stars turn loose,” King said.

The 72-hole tournament was originally to begin on Friday, Aug. 24, with 18 holes, the second 18 for Saturday and finishing with 36 holes on Sunday. But Corcoran decided to change the schedule and begin the event on Thursday with 18 holes a day. “The PGA frowns on 36 holes for its members during the summer months,” Corcoran said, “because the extremely hot weather takes too much out of the players and they can’t play their best brand of golf.”

The Jaycee Supreme Open field was small – just 36 professionals and 24 amateurs. That was the case for most of the tou rbecause many of the pros were active duty service members. Haas led the amateur contingent.

Since professional golf at this level was new to Knoxville, fans were asked to follow a few rules of etiquette, including: “Do not walk through or across any sand trap – it is tough enough getting out of smooth sand.”

Nelson was often referred to in the press as the “Toledo umbrella man.” The Toledo part came from his job as head professional at the Inverness Club in Toledo, Ohio. In those days, nearly all of the touring pros had jobs at country clubs in addition to playing in competition. Nelson was from Waxahachie, Tex., but the newspapers used the club affiliation as the pro’s hometown.

Nelson had dinner with Inverness member Cloyd Haas, co-owner of Haas-Jordan, a successful manufacturing company that made umbrellas. Nelson asked Haas to make a suitable golf umbrella, one that wouldn’t collapse or leak. Nelson introduced the finished product to the tour and as a result, Haas-Jordan entered the golf business.

At each tournament Nelson entered, he visited all the department stores in town and dropped off his Haas-Jordan business card. He was paid $25 per call. Thus, the Toledo umbrella man.

Despite Nelson’s being “overgolfed,” he took to Holston Hills immediately, shooting a 6-under 66 in the pro-am, leading his team to victory. Snead shot 71 and declared the 12th hole at Holston Hills “the hardest par-4 in America.”

The next day, in the tournament’s first round, Nelson picked up where he left off by winning 11 in a row, shooting 67 to take the lead by one shot over Hogan, Haas and Toney Penna. In a rainy second round, Nelson added a 69 for an 8-under 136 total, four shots ahead of Haas and five in front of McSpaden and Penna.

Nelson could only manage a 1-over 73 in the third round but held onto his four-shot lead over Haas and Hogan, who climbed the leaderboard with a 69 on Saturday.

But on Sunday, Nelson re-established his dominance on the pro tour, shooting a 5-under 67 to win the Jaycee Supreme Open by a commanding 10 shots over runner-up Sam Byrd, 11 over Hogan and 12 in front of Haas and McSpaden.

It was Nelson’s 14th tournament victory of 1945 and gave him a total of $50,966 in winnings for the year, which was a tour record. Nelson won four more times that year and his 18 victories in a year is another professional record that is likely never to be broken.

The pro tour returned to Holston Hills in 1946 but the tournament was known then as the Knoxville Invitational.The purse was $10,000 and the event moved to the middle of October. Nelson did not play in 1946, by then having retired from full-time tournament golf at age 34 to tend to his ranch in Roanoke,Tex., which he bought with his record-breaking 1945 earnings.

Neither was Hogan, Snead nor U.S.Open champion Lloyd Mangrum in the field. Herman Keiser, who beat Hogan by one shot to win the Masters the previous April in one of golf’s greatest upsets, took the first-round lead and never looked back.

After posting a first-round, 1-under-par 71, Keiser told KMOX Radio, “I believe today’s high scores were due for the most part to the fast greens and lengthy course. When I say fast greens, I don’t mean they are too fast... in fact, they are ideal. After today, I believe you’ll see the scores going down, but I don’t believe anybody is going to consistently break par in this tournament.”

Keiser was right. After leading the tournament after 36 holes at 2-under par, Keiser finished 72 holes at 3-over 291, good for a one-shot victory over Chick Harbert.

But to show you which sport was king in 1946, the Knoxville Invitational took the day off on Saturday so the players could attend the Tennessee-Alabama football game. Saturdays in October were sacred in Knoxville even then.

(Special thanks to Holston Hills member John Stiles for his contributions to this story.) 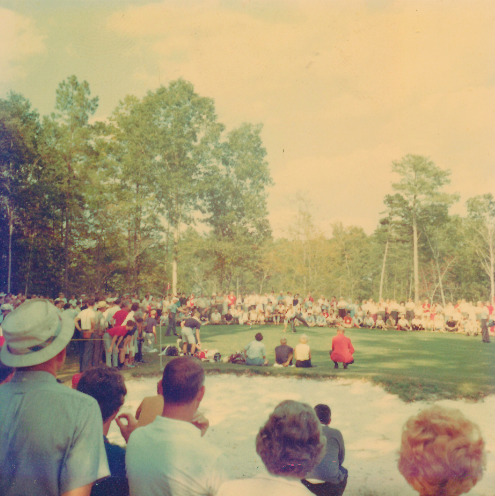 In 1760, a tract of land in Greenville, N.C., now occupied by Brook Valley Country Club, became part of a royal grant bestowed by King Charles to a family who later sold the property to another family, the Brooks. They maintained the land for centuries before selling the large tract for development. Brook Valley reflects the family name, and today a copy of the royal charter adorns the club’s front walls.

Ellis Maples, who worked under and learned from Donald Ross, designed the Brook Valley golf course. Brook Valley’s rich history includes an exhibition match between legends Sam Snead and Ben Hogan. Reynolds May - one of the development’s original investors and a promoter - was friendly with many of the world’s best golfers at the time. After helping develop the golf course, he established the Reynolds May Tournament that featured many top professionals. The trophy from that event still resides at the club, bearing names of many great champions - including a young Curtis Strange, who captured the inaugural event at Brook Valley, as well as 2012 U.S. Open champion Webb Simpson.

Today, Brook Valley’s future appears bright following the club’s 2015 purchase by McConnell Golf. The golf course and practice area were renovated under the tutelage of renowned Greensboro-based golf course architect Kris Spence whose work included bunkering and one green modification (No. 2), along with significant tree removal and the relocation of a number of cart paths. Spence called Brook Valley an “out of the box” design for Maples, mostly due to its intricate cross bunkering.

“We have brought the Ellis Maples bunkering back, as well as adding a few bunkers to modernize the golf course,” Spence says. “Brook Valley is a very nice mix of golf holes with a lot of variety. The par-5s, in particular, are some of the best three-shooters I’ve seen. It’s not long, but it is a great membership golf course.”

Don’t leave it to your imagination, catch a smile and wave from Sam Snead and Ben Hogan via YouTube.com/McConnellGolf.