Work & Play at The Mill 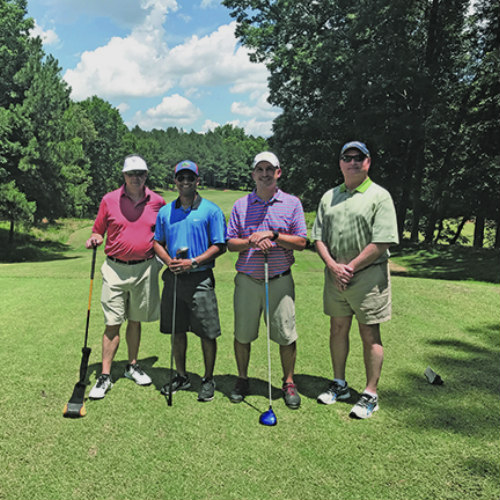 Musgrove Mill Golf Club is widely regarded as the perfect place for a corporate retreat. McConnell Golf member Matt Alexander knows from experience — he brings around 25 associates from Charlotte-based Eaton Corporation to Musgrove Mill for an annual three-day retreat. For the past couple of years, employees and business partners travel from all over the continent — from California, Georgia, Pennsylvania, Tennessee, and Mexico — to meet at Musgrove Mill.

The travel is worth it. From the moment Alexander’s group drives through the secluded woodlands to the gated entrance, where cart attendants wait at the front of the clubhouse to escort the group to their cabins, everyone begins to exhale.

Jeff Tallman, director of golf, coordinates the group’s itinerary. The next three days are spent relaxing on the property without the group having to move their cars. The retreat is a mix of work and play. Each cabin is complete with everything they need, from A/V equipment to golf carts. One of the best amenities? The accommodating hospitality of Musgrove Mill’s staff.

“Jeff and his team provide everything that we could possibly need,” says Alexander. “We have held meetings in many nice locations, but we always return to Musgrove because of the personal attention that Jeff and his team give us. They make everyone feel at home.”

Food is prepared in the clubhouse and delivered to the cabins where the business meetings are conducted on the first day of the retreat. Following their work, the team breaks for cocktails and dinner in the cottage. With a pool table, fireplace, poker set, and satellite television, the cottages provide entertainment while everyone enjoys each other’s company.

Day two begins with breakfast and meetings in the Lee Cottage. Then the real fun begins — in the afternoon, many in the group tee off on the challenging Arnold Palmer-designed course. Group photos are taken along the course, especially on the elevated tee box of the fifth hole and the signature seventh hole along the Enoree River. The non-golfers go nearby to shoot sporting clays at the wildlife refuge of the Clinton House.

Later, the entire group reconvenes for drinks and dinner at the Lee Cottage. Dinner is served on the back deck, against the backdrop of the scenic wilderness of Upstate South Carolina.

“The fact that we can all spend three days together in a great location, away from the office, and get some work done makes Musgrove Mill a great business retreat,” says Alexander.

“Add in the beautiful golf course and the way Jeff and his staff have everything coordinated, and it makes this easy and enjoyable. Our associates request we return every year. 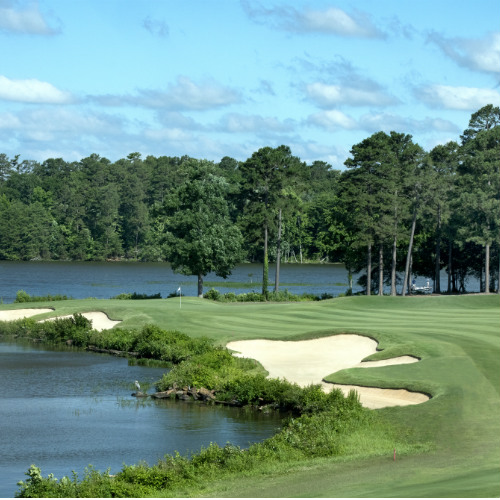 With the 2016 additions of Providence Country Club and Holston Hills Country Club, McConnell Golf encompasses a dozen 18-hole, private golf courses throughout the Carolinas and Tennessee.

For those of you scoring at home, that’s a total of 225 golf holes in the McConnell Golf portfolio, and they are undoubtedly among the finest you’ll play anywhere. McConnell Golf properties feature courses designed by legends such as Donald Ross, Pete Dye, Tom Fazio, Arnold Palmer, Greg Norman, and Hale Irwin. In 2017, as they do year in and year out, McConnell Golf courses dominated the various state rankings.

So picking the 18 “very best” McConnell Golf holes is no easy task. But through nominations from pros and member votes, that’s exactly what we’ve done. We’re pleased to present the final course in the words of those whom know it best.

Head over to Facebook for photos, descriptions and tips on each hole >>

Up to Date: MCG Scholars Eight years ago, McConnell Golf launched its high school golf scholarship program. Young golfers are nominated by their high school coaches or local industry pros based on talent, need, and commitment to the sport, as well as their proven dedication and value to the future of golf. The innovative program offers limited membership opportunities to the chosen scholars, who often otherwise lack the opportunity to play challenging courses. Scholars earn access to all McConnell Golf facilities and enroll in a structured program designed to help them elevate their game. They usual­ly become familiar faces around their respective adopted clubs, and many go on to promising collegiate careers. Here’s a look at where a few scholar recipients — two former and one current — are today.

South Carolinian Hunter Nichols’ writing was on the wall: He lettered in golf at Clinton High School after placing third at the 2013 South Carolina 3A Champi­onships and earning four all-region hon­ors and two All-State selections. Nichols was a shoo-in for Musgrove Mills’ first scholarship. Today, he’s thriving at Fur­man University, where he is an asset to the men’s golf team.

Danielle Mirovich is a rising senior at Mount Pleasant High School in Mount Pleasant, North Carolina and she’s made her mark through golf. The Miroviches only arrived to Mount Pleas­ant a few years ago after losing their home in Hurricane Katrina. What kept them grounded was a dedication to the game: Two older Mirovich daughters are already playing at the collegiate level. Danielle is following in her sisters’ foot­steps with a scholarship at Old North State Club, which will last through next season. Her parents’ support is evident and has struck a chord with the entire community.

Stephen Lavenets of Rougemont, North Carolina seized his scholarship at Trey­burn Country Club. It spurred him to win the Durham High School Invitational and cap off his tournament record with an eagle on the 18th hole at Treyburn — arguably one of the most difficult feats among all 12 McConnell Golf clubs. He joined the East Carolina Universi­ty men’s golf team, where a nagging hip injury led to major surgery almost immediately upon joining the team. It derailed Lavenets’ playing time, but revealed his true character. He emerged as a charismatic leader of his college team. Much like that difficult 18th hole, today Lavenets is on track despite his injury to graduate in four years with a finance degree. 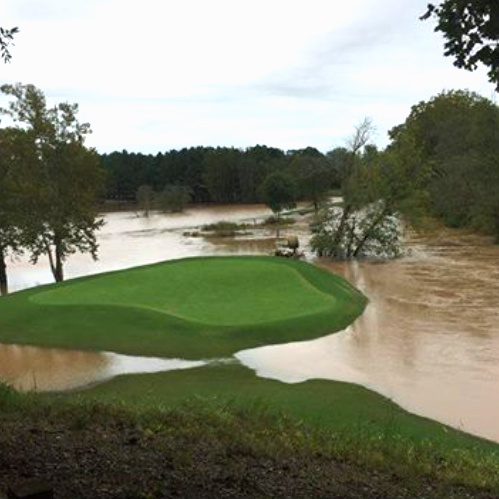 2015 was an extreme weather year for McConnell Golf. From flooding to below freezing temperatures, few of the 12 courses were immune from damage to greens and fairways.

Most McConnell properties are located in a natural transition weather zone. Therefore, courses utilize a mixture of warm and cool season grasses to ward against tem­perature fluctuation; yet neither grass type is able to thrive under some conditions. When that happens, the task is to recover swiftly, which is where Director of Agronomy Michael Shoun comes in.

That didn’t bode well for warm-sea­son Bermuda grass. Those courses’ north-facing slopes, often lacking sun­light, suffered severe winter kill. Even if the greens thawed during the day, they inevitably refroze at night.

Already weakened from the winter, June brought sweltering heat to the Southeast, with 12 straight days of tem­peratures at or above 95 degrees in and around Raleigh. The extreme heat damaged the cool-season bentgrass greens on multiple courses, and was then followed by heavy rain during the late summer and early fall.

Torrential downpours led to flooding, and South Carolina’s record-breaking deluge made national headlines. Mus­grove Mill Golf Club, located along the Enoree River, was an unfortunate victim. Over the fall, the course flooded four times. Some areas were submerged un­der 20 feet of water, secured riverbanks were destroyed, and a transfer pump used for delivering river water to an irri­gation pond was entirely swept away.

But it wasn’t all havoc and recovery. Over the course of the year, the Dye course at Sedgefield Country Club was the one course to fully close for repair due to weather-related dam­ages. “Once we realized we were going to have major issues at most of our courses due to weather, it was all hands on deck,” says Shoun. “Fortu­nately we had the financial support to get the winter-damaged sod cut out and immediately put new sod down and grow it in.” The team at Musgrove Mill worked from sunup to sundown for two weeks to clean up the course after the flood damage, and used an over­seeding technique of putting down rye grass on top of Bermuda grass to make the greens playable during the winter until they could completely dry out the following spring.

During the eight-week closure of the Dye course at Sedgefield, the fairway damage was so extensive that the team had to essentially build a new golf course covering nearly 22 acres. The team used sprigs, small plant parts grown elsewhere then planted to cre­ate a playable turf. Sprigging is one of the only methods that can be used for destroyed grass.

As the year wrapped up with one of the warmest and wettest Decembers on record, it’s needless to say Shoun and his team hoped for an uneventful 2016. “One of the biggest drawbacks of this profession is that you can take every precaution you possibly can, and Mother Nature can still throw you a curve ball and change everything,” says Shoun. But for him, this is par for the course. “We just happen to be in a tough area but it definitely keeps things interesting. I wouldn’t have it any other way.”