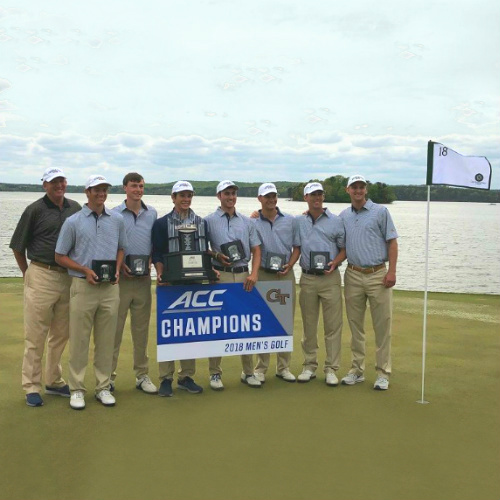 In 2018, McConnell Golf hosted four notable events that gave others from around the region, and even around the world, the chance to compete on some of our best tracks.

Old North State Club on Badin Lake in New London, NC once again hosted the Atlantic Coast Conference Men’s Golf Championship in late April. Warm breezes from across the lake graced the fairways as some of the best amateur golfers in the country attacked the Tom Fazio layout.

While the finish was down to the wire with Clemson, Wake Forest, and Virginia shooting low final round scores, Georgia Tech continued its domination of the ACC Championship with a 29-under 835 over three days to claim its ninth title in the last 13 years. This year’s title was also the 17th in program history for the Yellow Jackets.

“It’s a great conference with all these teams that are ranked, so any time you win here it means a lot, and this year is no different,” said Georgia Tech coach Bruce Heppler. “We knew that Clemson would come charging up the leaderboard, they always do. It got close and exciting, and this place brings that out. We’re just happy to walk away on top this time.”

U.S. Open Championship Qualifier
Holston Hills Country Club in Knoxville, Tennessee was proud to again host the local qualifying of the U.S. Open Championship in May. A total of 78 players from all across the U.S. and other countries played for fi ve open spots into the sectional qualifier. Perfect weather, pristine course conditions, and a strong field led to low scoring on the famed Donald Ross design. Sebastian Vazquez of Mexico took medalist honors with a round of 63 while four other players had 66 or better to fi ll out the fi ve available qualifying spots.

“Holston Hills has played host to this local qualifier for many years,” said Director of Golf Chris Dibble. “Our course is always a player favorite, and we enjoy having all of the different players here each year.”

Moving from the amateur ranks to the professionals, the annual Rex Hospital Open returned to Raleigh’s TPC Wakefield Plantation at the end of May. The Hale Irwin designed, 18-hole championship golf course proved once again to be a great test for some of the up-and-coming professionals on the Web.com Tour. Joey Garber of Petoskey, Michigan, and a Georgia alumni, persevered with a one stroke, 18-under victory. Coming in at a tie for second at 17-under were Hank Lebioda and Scott Langley. Of local interest, Albin Choi, a former player at NC State, and Cameron Percy, a resident of Wakefield Plantation and McConnell Golf member, each finished tied for sixth at 15 under par.

“The Rex Hospital Open has become a mainstay at Wakefield, and our members and staff alike look forward to it each year,” according to Wakefield Club Manager Michael Thomas. “This event has raised some $9 million for patients, programs, and services at UNC Rex Healthcare over the past 31 years.”

In June, the AJGA Tournament in Greensboro was played at the Sedgefield Pete Dye Course and has been newly rebranded as the Wyndham Invitational presented by BB&T. If that sounds familiar, it is because the same title and presenting sponsors are also on-board for the annual PGA Tour stop, Wyndham Championship, in Greensboro at McConnell Golf’s Sedgefield Ross course in August.

A week of great golf culminated as Karl Vilips, the No. 1 junior golfer in the Rolex AJGA rankings, blistered the Dye course for a 10-under 270 over the four days. During his third round, Vilips birdied the 18th hole to tie the competitive course record of 8-under 62. Vilips now has five AJGA victories and his is a name we should all remember There’s no doubt he will be playing professional golf soon.